There are a number of narrow band beacons in the 1.3 GHz band - see this page for an up to date list. There are also a number of licensed voice repeaters in the band which provide useful off air narrowband ID signals

The UK has a series of FM Voice repeaters and as well as some 23cm D-Star DV/DD systems. ETCC

The 23cm band accommodates significant ATV activity. FM-ATV is still popular but increasingly DATV is in use (based on DVB-S QPSK). See the BATC website and Wiki for further info.

Are you one of those people working the "same old, same old" stations on 144MHz, especially in the UKAC contests? Well how about taking the step up to the lowest of the GHz bands, 1296MHz (23cm)?


What's involved? How will it differ from 144MHz? What's it going to cost me, are all questions that you will be asking yourself before taking the step. This short feature tries to answer such questions and encourage you to have a go. The UK 23cm band covers 1240 to 1325MHz and we are there as guests or secondary users. We share the band with a number of L band radars that are close in frequency in the band 1215MHz – 1400MHz including Civil and Air defence en route Primary Surveillance Radar (PSR). A map of civil radar sites can be found at (1) The band is subject to major replanning, but this feature reflects the situation today. Contact the Microwave Manager (2) for further information on this replanning. The narrowband section covers the 2MHz from 1296 to 1298MHz and contains the bulk of the activity on CW/SSB, digital modes and repeaters. Satellite operation takes place between 1260 and 1270MHz, but in order to prevent interference to Primary Users, caution must be exercised prior to using 1250-1290MHz in the UK. TV repeater outputs are between 1300 and 1325MHz, with inputs between 1242 and 1249 MHz.


A basic beginners setup for 23cms is just about identical to 144MHz as far as equipment is concerned. It consists of a transceiver with a 1296MHz module, or a transceiver plus transverter, some low loss coax, and a Yagi antenna. (Fig 1). Due to the losses involved in coax (RG213 loss at 1296 is typically 9dB per 100m compared to 3dB at 144MHz) it makes sense to have a remote receive preamp at the masthead and switch it out of circuit on transmit. I covered the effect of masthead preamps on system performance in the GHz column in August last year (3). Fig 2 shows two ways of implementing a masthead preamp. The first with a single coax feed and two masthead relays (or a transfer relay) and the second using two coaxes and a single masthead relay. If your transverter or rig has separate TX and RX inputs, this is my preferred way of doing things for two reasons. The first is that only one relay is needed at the masthead, giving more reliability and you can split the receive feed in the shack to an SDR panadapter such as an RTL or Funcube dongle. The receive coax van be lossy thin cable such as RG58, as the masthead preamp gain will compensate.


1296MHz equipment is not expensive these days; a basic fully assembled transverter such as those at (4) and (5) will cost you well under £200, and a Yagi in the order of £90. If you are comfortable with Surface mount construction, a 45Watt PA kit can be had for under £100 (6) and a preamp for around £50 (7) Such a setup will be very competitive indeed, and will enable you to make use of all the propagation modes available for the band. You'll even be able to work some of the "Mega stations" such as PI9CAM and HB9Q on JT modes EME (Moonbounce).


Antennas With the tripling in frequency, antennas become smaller by a factor of three, or to put it another way , for a given boom length, you can get three times the performance of 144MHz. The visual impact of a high gain 1296MHz Yagi is much less than one for 144MHz, it being smaller than a typical TV antenna. Photo 1 shows a dual band array with 44elements on 23cm and 44 elements on 13cms with a domestic chimney for comparison. A single Yagi It can be put up on a light rotator without worrying about what the neighbours are going to think!


Propagation 1296MHz really come in to it's own when you consider propagation. It retains much of the DX characteristics of 144MHz, with line of sight, hilltop to hilltop performance and weather–dependent tropospheric enhancement. When this tropo becomes extreme and ducting takes place, 1296 can often be better than 144MHz and enhanced ranges up to 2500km are possible. The UK terrestrial records at August 2008 stands at 2617km. Due to the high ERPs possible with relatively small antennas, tropospheric scatter becomes an important mode when the band is otherwise "flat, with over the horizon ranges up to 500km quite possible. Add Aircraft Scatter enhancement up to 800km and you have a band that's always got some interesting DX possibilities.
Give it a go So how about stepping up and giving 1296 a go? I've only covered the basics of getting on for narrowband and DX working, but there's Digital and Analogue ATV, to consider, FM and repeaters and Data modes as well. Once you've experienced 1296, you'll be thinking about going higher in frequency, or doing EME seriously... or both!

You'll find up to date information on activity in the monthly GHz Bands column in RadCom, on the UK Microwave group's site (8) and in their monthly Scatterpoint magazine (9). The best value for £6 a year in the world! The UK Microwave group has a twitter feed @UKGHz and the hashtag #GHz_bands is used. See you on the GHz bands!

23cms is a great band to get an introduction to microwaves and several equipment manufacturers make transverters for 1.3GHz:

There are a number of "build yourself" articles on the Web such as
From the ARRL archive try, http://www.arrl.org/files/file/Technology/microwave/23cmxv.pdf
The excellent W1GHZ website has some simple to build designs. http://www.w1ghz.org/MBT/multiband.htm 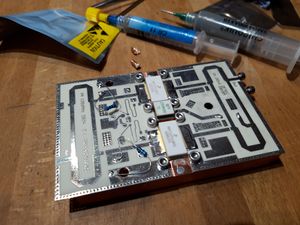 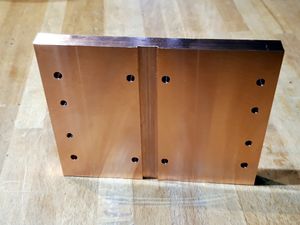 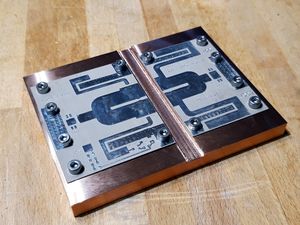