A simple signal source can be made using an old LNB discrete mixer diode (Marconi Blue cap devices are best) driven by a signal source at a frequency that can be mutltiplied up to the band of you choice. 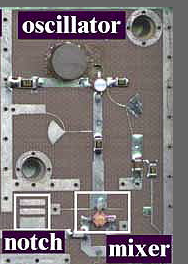 It consists of a microwave mixer stripline diode package soldered across the probe (spiggot) of an sma connector or even a short length of semi-rigid coax. when using a single diode a short wire loop is soldered in parallel with the diode to act as a DC return and choke. Both loop and diode are soldered, at their other ends, to the flange of the sma socket or to the outer of the semi rigid coax. Since the diode package used is a double array only one half of it needs to be used. 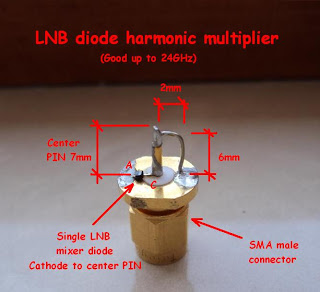 A 1GHz drive source producing 8mW or so then drives the diode multplier described above. Excellent stable and strong harmonics are easily found on all microwave bands to 24GHz. G8KMH measured the 47GHz harmonic of his marker on a spectrum analyser and reckons it could be heard over a km or so! (Given a suitable dish of course!). G3PHO also uses a G4DDK004 oscillator module at 2419.2MHz to produce a handy portable marker for his 24GHz narrowband equipment. 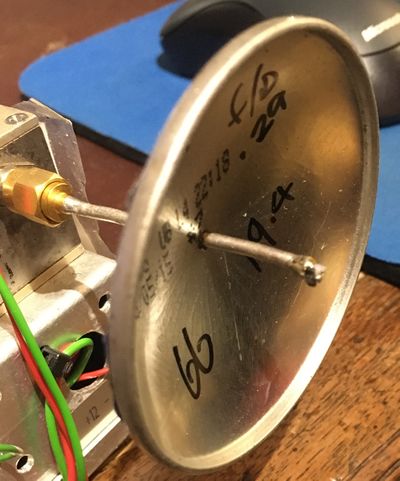 HP / Agilient mixer diode type HSMS8101 are available from Franco https://www.rf-microwave.com/en/hewlett-packard/hsms-8101/single-schottky-diode/hsms-8101/ or ebay and are very efficient at 122 – using it in the base of an old WD40 gives a 15dB signal over 15 mts across the garden.

The higher in frequency the drive source the better the chances of obtaining a useful harmonic on the millimetre bands such as 47GHz. An accurate source at 2350MHz producing a few milliwatts will do the trick.

To obtain ouput on the higher bands the diode can be driven by an Elcom synth, Nort LO or a brick oscillator

When driven with 11.1GHz a BlueCap mixer diode produces useful output at 122.4GHz.

The original idea and picture above came from G3PHO http://www.g3pho.free-online.co.uk/microwaves/marker.html

John G8ACE has a video of his 122GHz marker in action: https://www.youtube.com/watch?v=MOj1EOmbwHs

Thew 2nd picture came from Croatia Microwave and there are a couple of videos here: http://croatia-microwave.blogspot.com/2012/06/simple-lnb-diode-harmonic-multiplier.html